This company has a rich tradition, with its roots dating back to the year 1550. That is when the original pan forge was founded in Ybbsitz in the Lower Austrian Mostviertel region. The manufacture of high-quality porcelain enamel kitchenware began here in 1922.

Today, Julian Riess, Friedrich Riess and Susanne Riess, the ninth generation of the family, are at the helm of the company.

The RIESS porcelain enamel factory is the only porcelain cookware company in Austria and produces also porcelain enamel shields and industrial components. The traditional brand is now represented and popular in many countries in Europe, as well as in the USA, Australia, New Zealand, Korea and Japan.

For more information on our company please visit also our corporate site www.riesskelomat.at 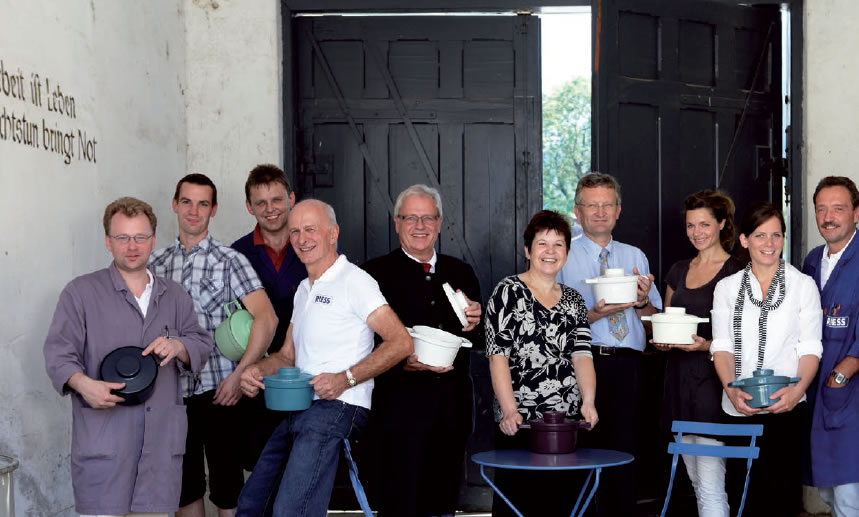 Cooking in the 19th century involved harmful substances. When heated, pans released toxic substances. Our grandfather decided to manufacture “healthy cookware” made from porcelain enamel.
If you think this is no longer a problem today, think again. Pots and pans are still potential sources of toxins. We are committed to cookware that is free of any harmful substances and which promotes health.
Nowadays our responsibility extends even further: we are committed to energy-saving and safe cooking. We help our customers to use our quality products so that the products have a long life. We address individual customer’s wishes – we put the customer first. We also don’t give in to management methods that try to tell us differently.

“Many of our kitchenware products have been on the market for decades.” Julian Riess

1975 The Austrian design icon Carl Auböck, among others, created a striped, round-bottomed pot for RIESS.

2005 The pop artist Mel Ramos and designer Tom Dixon worked at RIESS too, both appreciated the manual precision of the RIESS team.

2006 The Austrian design team POLKA, Monica Singer and Marie Rahm create the limited polka dots edition for the Vienna Designweek. The idea of the saucepan was changed, modified and transformed.

2013 As a part of VIENNA DESIGN WEEK ’13 Passionswege the British designer Oscar Wanless explored unconventional shapes of our enamelware production. By experimenting with different and “wrong in itself” positive and negative shapes in metal deep-drawing he created objects and vessels, far away from the geometry of the Riess pots, having almost textile qualities – ruffles and flounces in metal!

Since 2011 We have worked with the Dottings design company, Katrin Radanitsch and Sofia Podreka.
The ideas of RIESS truehomeware with the AROMAPOTS (cooking), KITCHENMANAGEMENT (storage),  RIESS EDITION Sarah Wiener (baking) line came into being. Our  Riesen (Giants) and Zwerge (Dwarfs) and the giant pan carrier and our SERVE + STORE foodcontainers also bear her distinctive signature 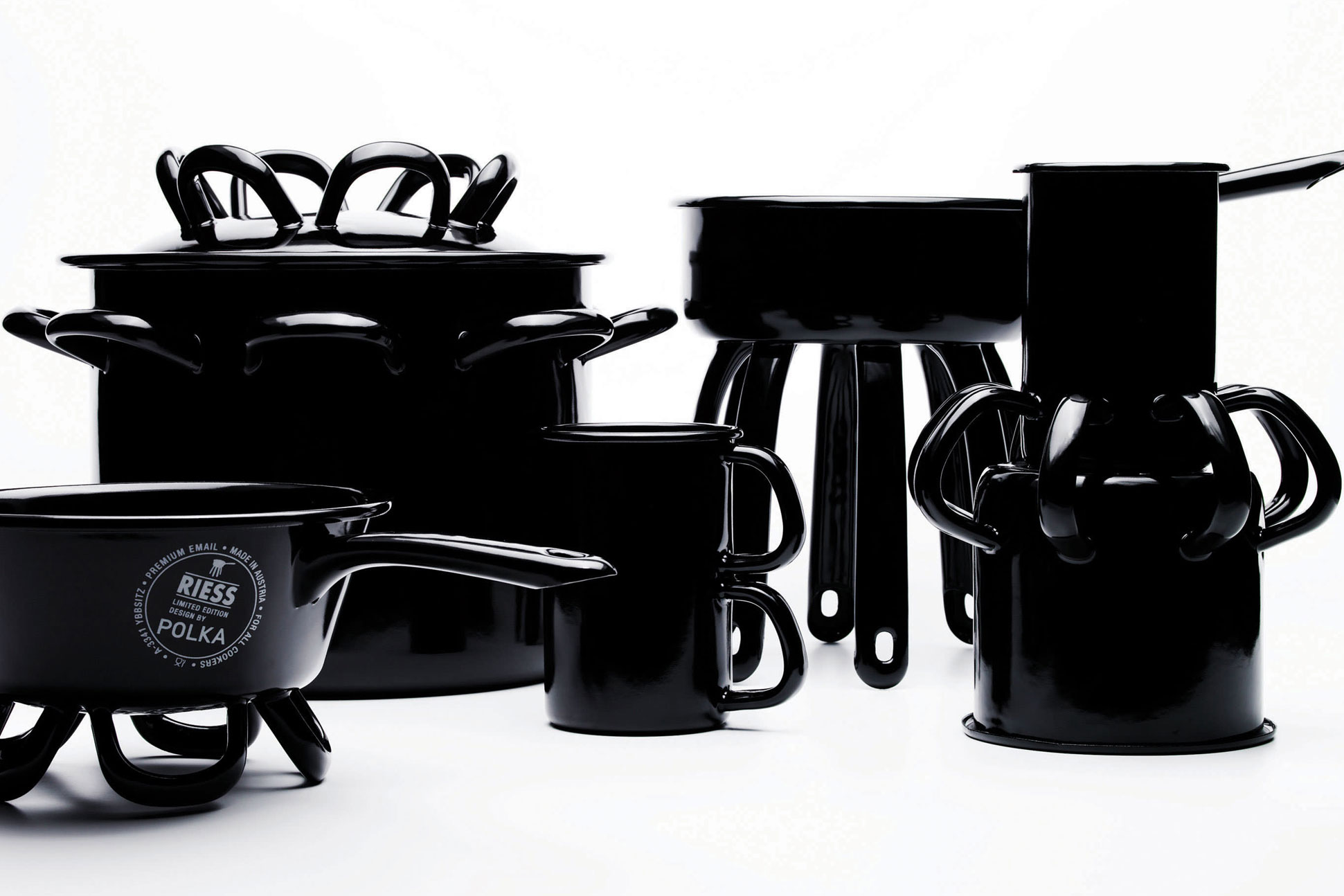 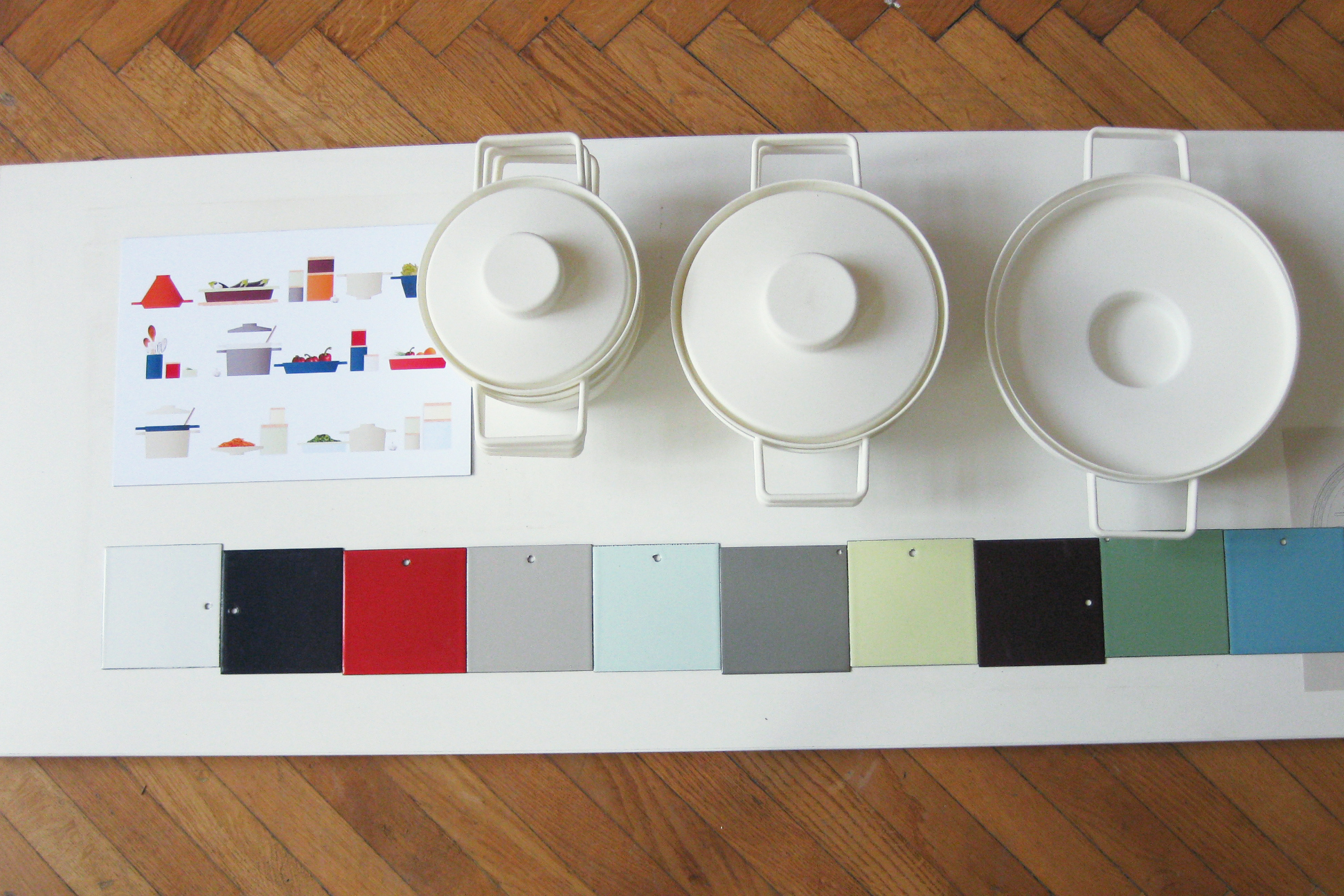 We are the only enamel manufactory in Austria and we are always pleased to welcome you.

After advance reservation we make (as far as the valid corona rules permit) factory tours from a group size of 10 persons. The end of the tour is the final stock sale, where a maximum number of 6-8 persons applies. The tours are possible exclusively Monday – Friday in the time between 8.00 – 10.00 o’clock and last approx. 1½ hours.

WELCOME + VISIT OF THE DEEP DRAWING PRODUCTION:
You will experience firsthand how a pot is moulded and shaped.

VISIT TO THE ENAMELLING PLANT:
Enamel is glass on iron. You will witness when the glass mass is applied to the pot and melted at 850°C in the kiln.